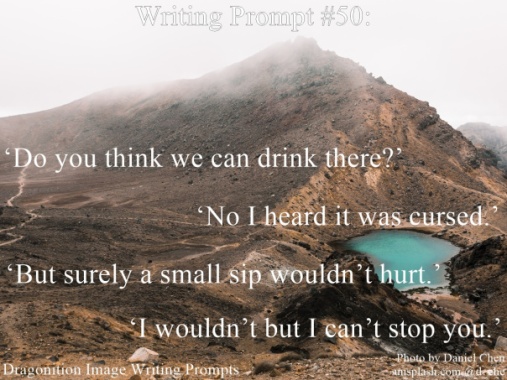 ‘Do you think we can drink there?’

‘No I heard it was cursed.’

‘If anything happens, tell my mom I love her.’

‘I can’t help it, I’m very thirsty.  We’ve been walking for ten days now and we barely had enough water to quench our thirst.’

‘I heard if you drink from it you will be faced with your biggest nightmare.  There’s another stream up ahead, can’t you be patient a bit more?’

‘Do you think anything that is cursed can be so beautiful?’

‘Yes, let’s try to block out the sound and walk forward.’

The walk towards the lake became harder as the mountain got steeper.  They knew it was best to turn to the left side, to take the road most sane people would take but the call cannot be ignored.  Gareth and Liam heard their names being called over and over again, a sweet Siren singing and waiting for her loved one.  They both were best friends and archaeologists who got onto this adventure in attempt to find out more about a temple built in the 4th Century A.D.  There were numerous rumors about such a temple and the village people all said that they would see the temple rise up to the top of the mountain every forty days.  It was then that they would lay their offerings of fruits, vegetables, meat, and poultry at the bottom of the mountain and initiate a dance of pledges to the Gods of the mountains and the holy temple within.  They also knew that the lake was cursed, and that nobody should drink from it and that when a person does, he is struck with madness.

Gareth and Liam didn’t pay attention to the folk tales and were determined to see the temple rise.  They arrived in Odes just one day after the supposed rise and were waiting anxiously for the days to pass.  They were reluctant, skeptical, and finally hopeful and never gave up.  They started the walk and had no help from Odesians who held onto each other in fear.

The lake was calling them.  They heard their names so clearly as they reached near it and their thirst increased tenfold with the dry air.  It was Liam who saw them first.  Creatures that looked like mermaids splashing in and out of the water with their long hair.

‘No nymphs, they don’t have tails.’

They decided to hide from sight and watch the magic they were meant to witness.

The sunlight shone directly on a golden rock situated in the middle of the lake.  Each of the nymphs entered the water three times, her skin turning from a subtle yellow to a pink, a blue, and finally to lilac.  She would then sit on the rock and brush her hair with a wooden comb into a side braid tied with a piece of grass.  Finally, she would walk on the water towards the big olive tree and sit down, singing.  It seemed to be a method of cleansing, a baptism of sorts, as each nymph did exactly the same.  When the final nymph took its place and formed a semi circle of beauty, the earth shook and the lake opened.  From within, twelve men wearing white robes marched up stairs that weren’t there before.  They approached the beautiful creatures and each took one in his hand and led her to the wide opening in the trees.

The singing continued and it seemed like it was coming from all around.  The sound of a harp and a flute playing light music.  They started dancing.  Smiles and laughter filled the air and suddenly, they felt themselves rise above ground.  Gareth and Liam smiled at each other in disbelief as the lake with its surroundings rose to the top of the mountain.  They could see the lights of the village below, see the offerings next to the three torches, and were wondering in awe.  It was spectacular.

A few hours of dance, the temple, they realized, started to descend.  The men went back in the lake and the nymphs walked into the dense trees behind them.  All the magic was gone.

‘I don’t know.  Let’s go back and tell everyone’

They walked in silence, repeating what they saw and reliving every moment.  They tried to reach conclusions as to why this happens and who are those men but didn’t find the answer.

A few steps towards Odes and all this will be recorded.  Yes, just a few more steps and we will be famous!  Gareth and Liam.

‘I think we wanted some water.  Let’s not drink from this lake, I heard it’s cursed.’

‘Let’s just go back down, there’s no rising temple.’