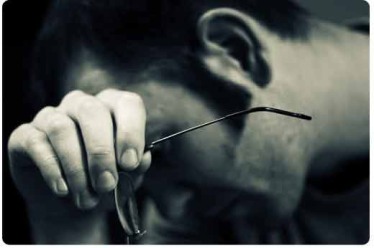 He wandered into the break room aiming for the coffee.  He didn’t want to be his normal self nor did he care to greet everyone as usual.  He didn’t care to say good morning to all his colleagues and, why should he, he doesn’t owe them anything.

Everyday, he puts on his suit and drives to work.  He passes smiles to everyone and cares, actually cares enough, to ask how they were feeling and listen to their reply.  He knows that this is the correct thing to do and what is expected of him.  But today is different, he doesn’t want to smile, he doesn’t want to say good morning because it’s not a good morning, and he definitely doesn’t want to make small talk, he just wants his coffee.

It started early.  He woke up on the wrong side of the bed and things just kept rolling in the wrong direction, a small snowball escalating to take over his day.

He was usually a kind and sensitive man.

And yet today was different.  The neighbor’s dog was barking at his own shadow from the wee hours of dawn.  He walked away from the window towards his phone just to see that it had 21% battery life; the switch wasn’t turned on!  He turned on the switch quickly forecasting how much battery he would have once he gets out of the house.  He dropped a big blob of shampoo down the drain and immediately felt sorry for himself: come on who does that!?  He’s a respectable man!

Traffic jam on the way to work, a call from the bank informing him that he must present two IDs as a precaution, and his mother called.  All this before 9 a.m., all this without coffee.

He pressed on, ignoring the smiles, ignoring the eager faces waiting for him to ask how they are, ignoring the urge to turn around and never come back.  Pressed on, knowing that this day isn’t a good day regardless of how hard he tries to convince himself.  Knowing that it’s not a good day to be himself, it just doesn’t feel right.  He glanced at the calendar while pouring himself the cup of coffee and froze.

He finally knew what his soul was trying to tell him: it was time to renew his vows, time to take away another life, time to sacrifice for the master of Death.

2 thoughts on “Cranky- A Story”